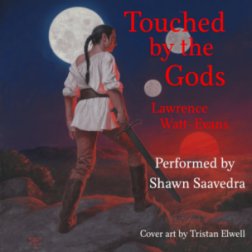 September 10, 2020: After a long hiatus resulting from extensive travel and relocating to the West Coast, we're back! We are not yet entirely caught up, but we're getting there. We expect to add four titles by the end of the year -- one new one and three reprints. We're keeping the details of the reprints quiet for now, but the new one is Tom Derringer & the Steam-Powered Saurians, third in the series. Oh, and already available is an audio edition of Touched by the Gods -- find it on Audible or Amazon. We've also released a corrected edition of the print and ebook editions of Touched by the Gods, fixing a couple of minor issues (mostly formatting, but one text error we caught when listening to the audiobook). Our most recent title, Tom Derringer in the Tunnels of Terror, is available at all the usual online outlets. It's the second in the series. Our previous title was Hazmat & Other Toxic Stories, a collection of 21 dark and twisted short stories by Lawrence Watt-Evans -- nineteen reprints and two original to this volume. None of these are included in any of the author's other collections, though some have been offered as mini-ebooks. These are most of his short horror, covering from 1988 to 2016, and most have never been reprinted before. They originally appeared in a wide variety of magazines and anthologies.

Twirling Jennies, our first venture into non-fiction, is still available! Twirling Jennies is a history of dance in Lowell, Massachusetts. We promise, though, that you don't need to live in Lowell or know how to dance to enjoy it -- it's full of fascinating historical and personal tidbits, with over 300 illustrations, everything from street scenes to dance cards. You can order it from Amazon

or Barnes & Noble, as well as the other usual outlets. (Due to the book's heavily-illustrated and colorful nature, there is no e-book edition.) A real labor of love, all for a mere $28.95.

All our regular titles are also still available, of course; click the Titles link for our catalog.

In an attempt to boost bookstore sales we made some of our titles returnable, which required us to increase some (not all) cover prices. The program was not successful and has been suspended, but the following titles were affected:
Warp Angel by Stuart Hopen: Increased to $18.95 on July 1, 2016.
The Raven Coronet by Christina Briley: Increased to $18.95 on July 1, 2016.