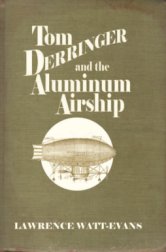 Tom Derringer and
the Aluminum Airship

When he was eight years old, Tom Derringer discovered his father's journal and learned that the late Jack Derringer was a professional adventurer. For the next eight years Tom studied and trained to follow in his father's footsteps.
Then in 1882, when a mysterious flying object appeared in the Arizona sky, Tom set out after it -- and he and his plucky companion Betsy Vanderhart found themselves pursuing a would-be conqueror through the skies and jungles of Mexico...

I had set out to write a "young adult" steampunk adventure, but my childhood love of 19th century adventure novels got the better of me, and it turned out not so much punk as pulp. I like it even better that way, but publishers didn't, so it's here at Misenchanted Press. And the entire series will be! The second volume, Tom Derringer in the Tunnels of Terror, was released in July of 2017, and the third, Tom Derringer & the Steam-Powered Saurians, is coming soon.

The trade paperback edition is $12.95.
The Kindle edition

is $3.99.
The Barnes & Noble ebook and Smashwords edition are also $3.99.
A rack-sized paperback is available for $9.95, only from Lulu.
The trade paperback edition is available from Amazon